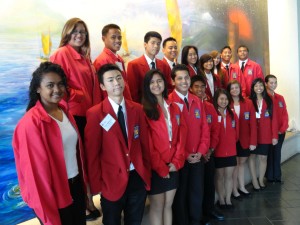 After winning their events at the annual state SkillsUSA competition, seniors Jammie Lee Go and Hali Wilson will compete in Kansas City, Missouri at the national level in June.

Go won first place in the SkillsUSA Advertising Design competition. She said that she didn’t expect to win because she had won a gold the previous year. “I was shocked when they called my name. I had a funny feeling of excitement and nervousness when I knew I was qualified for the nationals.”

Accepting the National Co-chair position for the SkillsUSA Championship in Job Skill Demonstration is Graphics Communications teacher Mr. Lane Yokoyama. He will accompany the two students to Missouri.

“I was National judge the last two years. It has been quite an exciting ride.  I am going to stay on this ride for as long as I can,” said Mr. Yokoyama. “I am honored that my peers have faith in me to lead this competition.”

In preparation for the trip, Mr. Yokoyama said, “We are in need of some funds to help defray the costs of going to the national competition, so we will be selling t-shirts, towels, and anything else to help us.”

Taking second place with a silver, also, in the the SkillsUSA Advertising Design competition is senior Zachary Galiza.

“I was happy when I got second place and I know all my hard worked paid off in all my years in graphics class,” said Galiza. “Even staying afterschool to practice was time consuming, so it was worth it.”

Freshman Alexis Ross participated in the Prepared Speech Demonstration where her topic was on “Champions at work: Skilled and Motivated.”

A first-time participant at the convention, Ross said, “I was nervous because there were three judges staring at me.”

Although she didn’t place, Ross said that she is glad she did it because “I made new friends from the convention as well as in the club.”

Ross practiced for the competition by “standing in front of a mirror and saying my speech over and over again.”

“I’m scared to go to the nationals,” said Go. “But also excited because I get to go to the mainland for a week.” 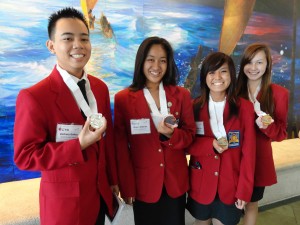 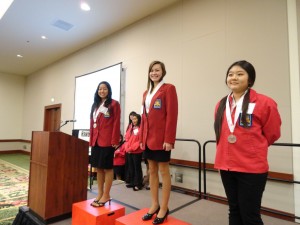