Addison Jackson, Reporter
Standing in a circle around the big “C” representing the opposing school’s (Campbell High School) team, Varsity football players sang the school’s alma mater. Sounds of the athletes’ chants filled the air. One by one, each football player left the circle, and with candle in hand, set fire to the monstrous wooden letter in the evening’s bonfire tradition before the game a few days later.
Among them is junior Julian Brown. “Finally, lighting the ‘C’ on fire was a great experience,” Brown said. “It was my first time as a varsity player and I’m proud of it. It was so exciting. Everyone had smiles on their faces and were having a great time. That night I was ready and more pumped up for that game than any other.”
Food and drinks were sold at tents ran by school clubs. Students had the opportunity to sink their teachers at the dunking tank and a few boys were playing football on the field opposite of the bonfire.
Freshman Angel Almaden said that she enjoyed the bonfire’s festivities. “I had fun hanging out with my friends and walking around,” Almaden said. “I also liked all the food and when they burned the C. Ashes were everywhere. It was so much fun. The best was the food at the Drama Club booth.”
The Drama Club sold brownies, cookies, and chocolate covered strawberries and bananas. Selling a variety of food and beverages, customers had their pick among musubis, lumpias and bentos at other booths.

“I was so excited,”  Krixtofer Hughley, senior and Varsity football player, said. “Lighting the C on fire was awesome. There was a good feeling in my stomach while it was burning. I talked and hung out with friends and ate some food from all the different booths. All in all, the bonfire was great.” 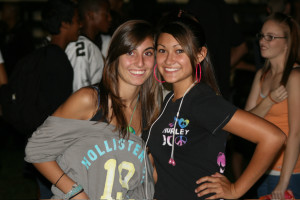