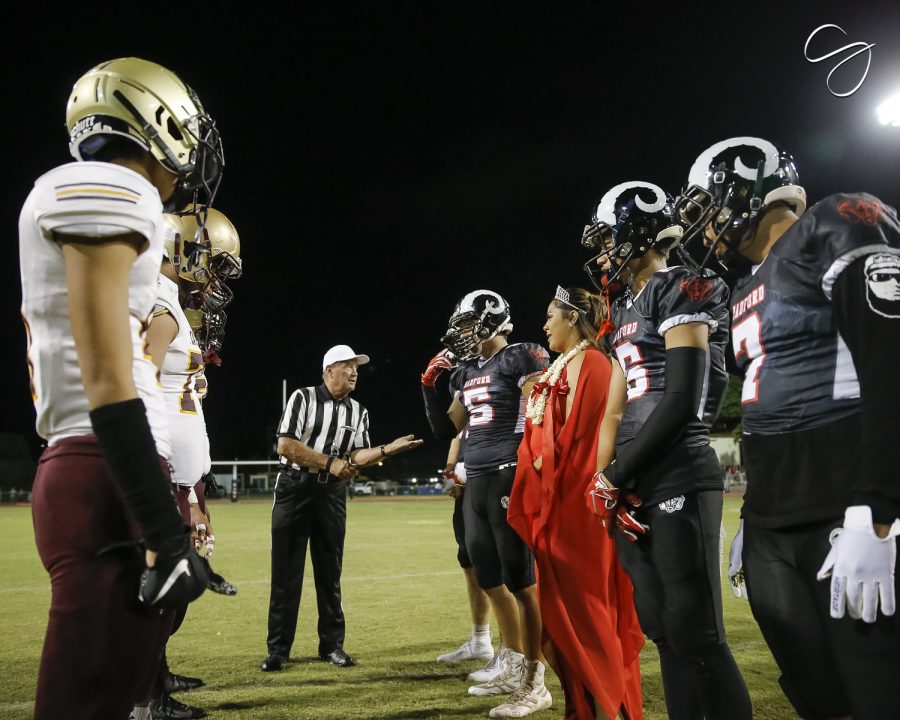 The Radford Rams played the Castle Knight’s during the Homeocoming game. The teams participated in a coin toss at the start of the night. (Photo Credit: CJ Caraang)

After a strenuous summer of building strength and confidence as a team, the Radford Rams were building momentum going into the season. The Rams were looking forward to a great season. Over the season, the Rams played various teams around Oahu such as Aiea, Kailua, and many other teams.

“Football season has been a great learning experience for a lot of the lower class men, and a chance for our seniors to build character due to the amount of injuries our team had to face this year,” said Senior Varsity Player, Ma’a Pase. Despite not winning games this season, the team took this season as a learning experience

On August 9, the team headed to Aiea to kick things off for the first game of the season The Rams were excited to get things started. During the game, Radford quarterback Jiovanni Tafisi threw a 35 yard pass to Braden Kent for a touchdown. Radford defensive lineman Ma’a Pase was able to sack Aieas quarterback two times on defense for Radford. The first game of the season did not go well unfortunately, as Aiea scored 34 points compared to the Rams 19 points. The team kept their heads up despite the loss.

On August 15th was the second game of the season, as the Rams played Damien for the first game at home for Radford this year. During the game, running back Danneh Alpha rushed for 91 yards and a touchdown for the Rams. Radford running back Kendall Saxton also rushed for a touchdown. Damien ended the game on top against Radford 12-34.

On September 6th was the fourth game of the season, and the Rams had another away game as they played in Waipahu. Rams quarterback Jiovanni Tafisi ran in the endzone for a 5 yard touchdown against Waipahu. Radford lost to Waipahu 14-43.

On September 13th, Radford was against Castle at home for their homecoming game. Radford defensive back Chase Daack intercepted Castles quarterback and and took the ball 95 yards for a touchdown. The Rams fell to Castle 6-20.

“I wouldn’t have asked for any other coaching staff who taught us not only the game we love, but life lessons as well” said Pase.

Although the season did not turn out the way the team wanted it to, the Rams pushed through adversity the whole season and worked hard every week which was a great learning experience for the team.