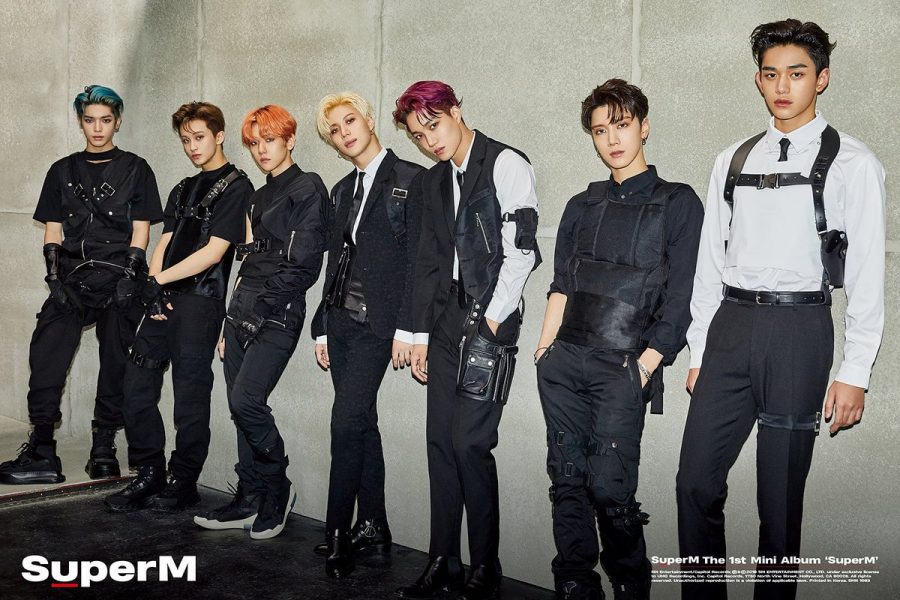 The first mini album sold 168,000 copies, making history with largest debut sales by a K-Pop act. They were the first K-Pop debut group to be at No.1 on the Billboard 200 Album Chart, in October 2019, other than BTS.

“I think that SM’s decision to put a variety of members from different groups, that each debuted from different eras really brings fans together,” Lyssalynne Mamaradlo (12) said. “We can get to see how well they work together.”

SM Entertainment, Korea’s Largest entertainment company, planned on combining some of their most popular boy groups together and pulling some of the members from each group to put them into SuperM. They come from different groups such as NCT 127, WayV, SHINee and EXO. Just like the Avengers, they all come from different groups and are put into one big unstoppable group.

These groups (NCT 127, SHINee, and EXO) have all made an impact to the fans and have all been very successful in Korea and even here in the U.S. All three of these groups have visited and performed concerts in America plenty of times.

NCT 127, made their American debut on GMA, Good Morning America, and on “Jimmy Kimmel Live” in July of 2017. SHINee made their American debut in 2016 performing in Dallas and Los Angeles as part of their SHINee World V Tour. Exo made their debut in 2010 where they performed in Chicago, and again in 2013 performing in Los Angeles at Kcon, a Korean festival. In 2017 Exo did an interview on iHeartRadio where they talked about how being apart of Exo for 5 years were great for them along with how they had been all over Times Square, which was a big deal. SuperM has actually been on tour since Nov. 11 starting off in Fort Worth, Texas and they have a line-up of tour dates that are scattered around in the U.S.

SuperM made their first televised appearance on The Ellen DeGeneres where they performed “Jopping” leaving the fandom in a frenzie. Ellen herself eventually tried to do their dance moves, jumping and popping, after the boys kept convincing her. Even though the members of SuperM are in other groups, it does not mean that they will be left out of their previous groups or solo careers. Many of the members are still recording music with their previous groups that will be released sometime in the future.

With all of this hard work from all the members, it can be tiring and very exhausting with the fact that some are in more than 2 groups and are having to keep making/producing music and not having very much time to rest and take a break.

“As a fan, I of course worry about their health and sleep schedule,” Mamaradlo said. “They’re not just singers and performers. They’re performers, giving their all at every performance for their fans. I feel like they do need breaks, and a lot of rest from working so hard.”

Although some fans of the groups were happy with the combination of members, others had their doubts and were a bit upset with how it, SuperM, turned out.

“To me SuperM doesn’t really do anything,” Kameryn Jansen (10) said. “I think their debut was mediocre and all the members don’t really fit. Of course I think the idea was a good concept, but I personally think it doesn’t work out in the way their company wanted to.”

However, from other fans they really enjoy the group, “SuperM is a really nice group,” Cierra White (12) said. “It includes members from existing groups. The fandoms are able to band together and show love and support the mega group. Also, the concept that SuperM uses is quite new and hot.”

SuperM may be a group where some fans think is unnecessary or not needed, but what some people don’t know is that SuperM is a group that has amazing vocalist, rappers, dancers and visuals. That was why all the members in the group were chosen because they gave off amazing visuals and other aspects to the group.

SuperM also has songs from their album that give off the type of vibe that will make someone want to jam out to especially Jopping, which is the title track of their album. Their other songs such as Super Car, reminds fans of Exo’s song Wolf. Another song No Manners is a very calming song and they show off what the vocals can do.