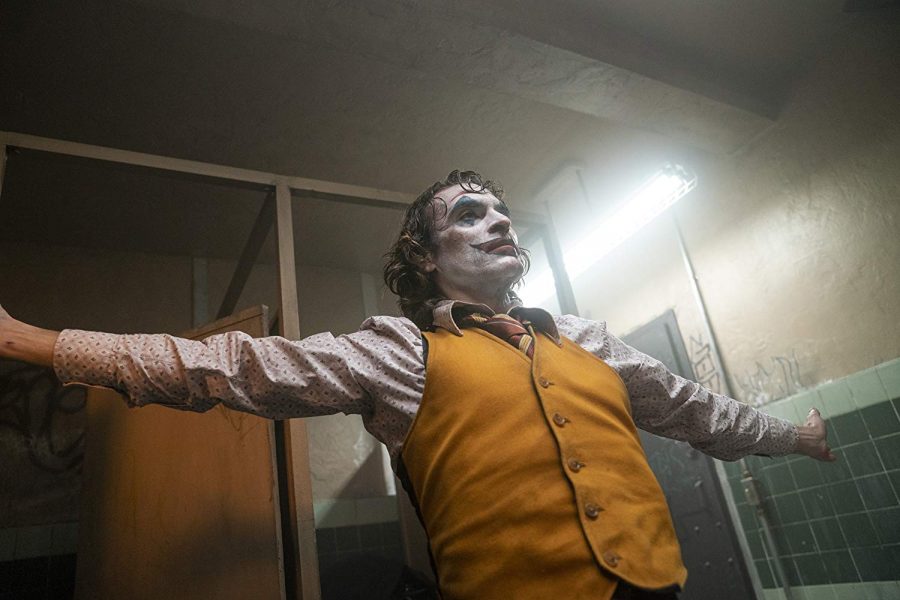 “It’s up to you how you want to interpret it and experience it. It’s less you being kind of presented with the facts than you being presented with these possibilities,” actor Joaquin Phoenix told The Los Angeles Times. (Photo from IMDB.COM / WARNER BROS. PICTURES)

Joker is a refreshing movie for the DC Extended Universe. After movie flops like Justice League and Batman v Superman: Dawn of Justice, fans were left wanting more from the DC Universe. Especially after the success of the Marvels Avengers series which brought in a total gross income of 6.4 billion over all four movies. Joker brought in a gross income of $737.5 million making it the highest grossing rated R movie of 2019 so far.

Joker follows Arthur Fleck, a man in his thirties, who lives in an apartment with his elderly mother who needs day to day help. He doesn’t make much money so he relies on his job as a clown. Arthur spends his days waving signs for stores, cheering up children at a hospital and doing other tasks that you would expect a clown with good intentions to do. Although, even with good intentions, Arthur is left with a brutal beating from a bunch of kids that begins to make him realize just how messed up the world is. The event starts his resentment for the world and for the people that live in it. This angle of the well known super villain the Joker may have left some people wanting more action like in the Batman movies. Where the Joker is a real villain against Batman, leaving goons to distract him while he goes off causing mayhem. The Joker in this movie is a lot more of a psychological scare. Showing just how a society can truly ruin someone, pushing them to the absolute edge of their own sanity.

Naturally, not everyone is a professional movie reviewer but it’s a good overview of what the audience thinks of it.

One can’t talk about Joker without talking about the controversy behind it. In 2012, there was a mass shooting at a movie theatre during a screening of The Dark Knight Rises which killed 12 and injured 70. James E. Holmes, the one behind it, told officials that he “was the Joker.” After this incident, many movie goers were nervous of a film based around the antagonist himself. People say this movie caters towards anyone who’s been oppressed or bullied and is telling them to rise up against them with violence. The Joker seems relatable since he is a mentally ill man kicked down by society and left to rot. This isn’t the case at all. Todd Phillips, the director of the movie said in an interview with the LA Times, “Ultimately, the movie is about the power of kindness and the lack of empathy in the world, and the audience seems to have picked up on that. It’s amazing that a movie that was supposed to inspire, as they put it, mass mayhem really has just inspired a bunch of people dancing down staircases. I think that speaks more to our times than anything.” Phillips doesn’t believe the controversy behind inspiring a mass shooting like what the media has said. Hearing it straight from the producer himself, the power of kindness and just showing some compassion.

In conclusion, Joker was an interesting new take on the title character and left the audience speechless in a good way. The experience of seeing the movie is one many won’t forget and may even go back to the theaters to see it again. The soundtrack for the movie isn’t very intense or anything you’d expect in a movie like this. It remains an eerie track and almost horror like. Originally Joker was supposed to be a stand alone movie but a sequel is very possible as Joaquin Phoenix is more than willing to act for it.