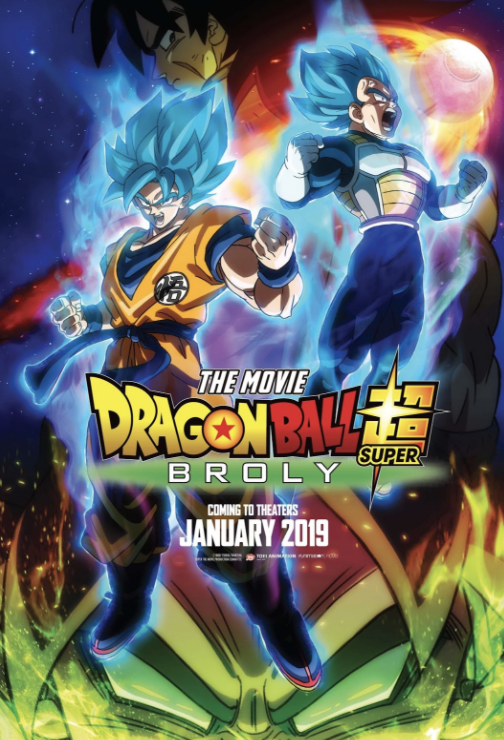 “Dragon Ball Super: Broly” is a film that every Dragon Ball and anime fan should watch, even if you don’t have any interest in Dragon Ball or anime, in general, you can still watch the film and appreciate it for its epic visuals and action. It premiered Nov. 14, 2018 in Tokyo and the film was released in English dub for the U.S. on Jan. 16, 2018.  Directed by Tatsuya Nagamine and written by series creator Akira Toriyama, it’s the twentieth movie in the huge franchise that is Dragon Ball but is only the third canon film produced within the series that Toriyama himself, had direct involvement in.

“Dragon Ball Super: Broly” became the third highest grossing anime film all-time in the U.S., only being beaten by “Pokémon: The Movie 2000” and “Pokémon: The First Movie.” Broly has gotten positive reviews from many film critics across the media and is even nominated for the Animation of the Year award at The 42nd Japan Academy Prize.

Set after the events of “Dragon Ball Super,” the film features the first official canonical appearance of fan-favorite character, Broly. Broly first appeared in 1993 in a non-canon film, followed by two more in 1994, after the popularity and success of his character. It has been a lengthy 25 years since his original appearance, now he’s back and it’s official. Main characters Goku and Vegeta share the spotlight with Broly. The film covers the background of their alien heritage and explains what happens to the latter’s disappearance from prior events of the series, leading up to Goku and Vegeta eventually meeting him.

As a long time Dragon Ball fan I had goosebumps the entire time while watching the film and thoroughly enjoyed it. The movie does a satisfying job at retconning the original story of Broly. For example, his character has more depth now, unlike his original counterpart who didn’t have much going for him except being hellbent on destroying everything. The film may be hard to watch for those unfamiliar with the series. As accurately said by Rotten Tomatoes critical consensus, “Dragon Ball Super: Broly may seem like colorful chaos to newcomers, but for longtime fans, it represents this long-running franchise near its action-packed apogee.”

The critic views of the movie as a “colorful chaos” to newcomers can be seen in a positive light in favor of the franchise. If the movie piqued the interest of new viewers, then they have a higher chance to dive more into the world of Dragon Ball. I recommend this film to anyone, it’s a fun watch that kids of all ages, and adults, can enjoy. I hope that we can expect more films of the same quality to come in the near future.