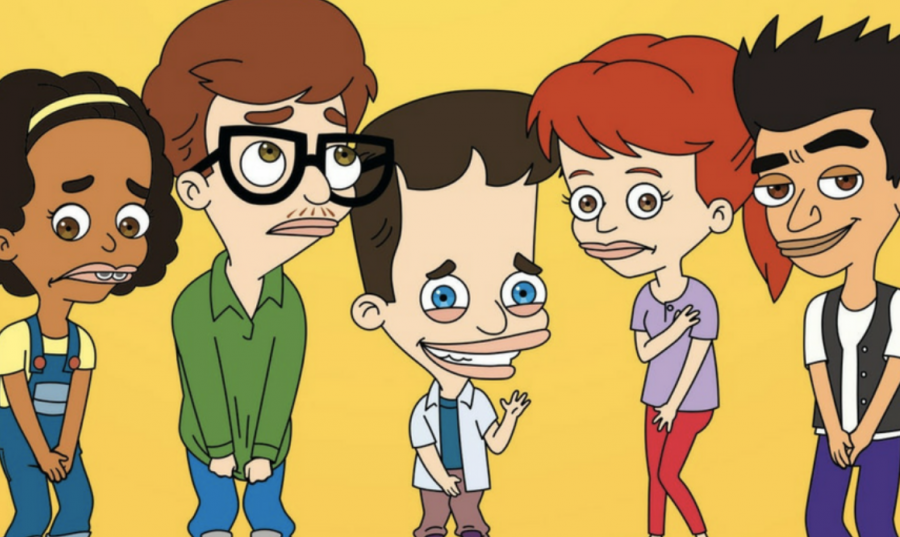 The “Big Mouth” characters stand together. The show first came to Netflix in September of 2017 and has recieved mixed reviews. The Guardian, said, “The series’ insistence that sexuality isn’t something to be afraid of resonates strongly at a time when it seems as though many adults could benefit from a crash course on human sexuality, as well as treating people with dignity and respect.”

“Big Mouth” debuted in Sept. 2017, exclusively on Netflix and got its name for being an incredibly inappropriate, yet hilarious animated show. The second season, which came out Oct. 5, wasn’t as graphic as the first and was a little more relatable to someone who was once a middle schooler going through the first stages of puberty.

The show follows the lives of a group of middle schoolers, Nick, Andrew, Jay, Jessi, and Missy, in which they navigate their path as it gets confusing when hormones and changes come into to play. Maury and Connie are two other important characters who are the ‘Hormone Monster/ess’ for Andrew and Jessi, who guide the characters through puberty.

The second season picks up where Nick is dissatisfied when he realizes that he isn’t developing like his friends, and he worries that he will always be the ‘small one’ in his group. Andrew is still having difficulty understanding his body and learning to control it and soon feels ashamed with himself. Jessi is having a difficult time adapting to the news of her parents’ divorce and that her mom cheated on her father with a woman which leads her down a dark path of depression. The characters  Jay and Missy are developed further as they weren’t mentioned as much in the first season.

The episode that really struck home for me was the last one of the season where Jessi is introduced to the ‘Depression Kitty’ due to the fact that she felt the Hormone Mistress, Connie, was doing nothing but make her already hard life even harder. In previous episodes, Jessi had taken edible marijuana gummies and shoplifted, with Connie’s encouragement. This episode and her situation were extremely relatable as someone who suffers from depression and went through phases of drug use and shoplifting in the past. The best part of the episode was when she finally confided in her mom and said that she wanted to see a therapist.

Another amazing episode was ‘The Planned Parenthood Show.’  The class explains to Coach Steve, their SexEd teacher, who ironically had seldom information about sex, why Planned Parenthood is a facility that provides other services besides abortions. They perform skits, which allude to other shows and movies, on the services that they provide. They end the show with a fourth-wall break where they sign off as if they were Saturday Night Live and say, “You[the liberal league] convinced us to do an episode on Planned Parenthood, even though so many people are gonna be furious at us for doing it.”

This show and season was overall magnificent and well thought out and honestly better than the first season. I wish this show had been around when I was in middle school so that I could understand that I wasn’t the only one going through the changes. If you ever have some spare time on your hands and are wondering what to watch next on Netflix, then I deeply recommend this show.