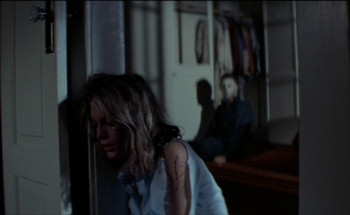 While Halloween is the time of the year to dress up as your favorite character and treat yourself to gluttonous treats, some people would rather stay at home, indulge in butter laden popcorn and sit back for a few hours for a scary movie marathon.

Whether you end up partying or trick-or-treating, here are the top 10 scary movies you need to watch to get into that Halloween spirit.

#10 “Blair Witch Project”
This 1999 American horror movie features the story of three student filmmakers who disappeared while hiking in 1994 to film a documentary about a local legend known as the Blair Witch. Viewers are told the three were never seen or heard from again, although their video and sound equipment (along with most of the footage they shot) were discovered a year later by the police department and that this “recovered footage” is the film the viewer is watching.

#9  “Texas Chain Saw Massacre”
In this film, a group of friends are victims to a family of cannibals while on their way to visit an old homestead. Although it was marketed as a true story, its plot is entirely fictional; however, the character of Leatherface and minor plot details were inspired by the crimes of real-life murderer Ed Gein.

#8 “Halloween”
On Halloween night in 1963, six-year-old Michael Myers murders his  sister by stabbing her with a kitchen knife. Fifteen years later, he escapes from a psychiatric hospital, returns home, and stalks teenager Laurie Strode and her friends. Michael’s psychiatrist Dr. Sam Loomis suspects Michael’s intentions, and follows him to prevent him from killing.

#7 “REC”
A 2007 horror film, this was shot in Barcelona, Spain and the title is an abbreviation of the word “record” as it appears on a video camera.

#6 “Jaws”
A 1975 film, in the story, a giant man eating great white shark attacks beachgoers on Amity Island prompting the local police chief to hunt it with the help of a marine biologist and a professional shark hunter.

#5 “The Evil Dead”
This video focuses on five college students vacationing in an isolated cabin in a wooded area. After they find an audiotape that releases demons and spirits, members of the group suffers from demonic possession.

#4 “Psycho”
This movie was made in the 1960s and is about a secretary, Marion Crane, who ends up at a secluded motel after embezzling money from her employer. It follows her and the motel’s disturbed owner-manager, Norman Bates.

#3 “The Shining”
This 1980 movie is about a writer, Jack Torrance, who takes a job at an isolated hotel. His young son possesses psychic abilities and is able to see things from the past and future, such as the ghosts who inhabit the hotel. Trapped in the hotel by a snowstorm, Jack is possessed by a supernatural presence and attempts to murder his wife and son.

#2 “Insidious”
The story centers on a couple whose son enters a comatose state and becomes a live body for ghosts.

#1 “Exorcist”
The book, inspired by the 1949 exorcism case of Roland Doe, deals with the demonic possession of a 12-year-old girl and her mother’s desperate attempts to win back her child through an exorcism conducted by two priests.