Science and math teacher Robert Butz is new to the faculty, but has old ties, since 2012,  to the school. Butz teaches Algebra I, Conceptual Physics, and STEM Robotics.

“I love Radford High School,” he said.“My oldest daughter, Carlyann, is a 2015 Radford graduate. She is currently a junior at the Air Force Academy studying to be a Civil Engineer with a minor in Japanese. She’s also contemplating going to pilot training when she graduates. My other daughter, Camryn, just graduated in 2017. She is now a freshman at Marian University in Indianapolis studying to become a Nurse Anesthetist.  And finally, my son, Charlie, is currently a sophomore at Radford.”

Radford is a family affair for the Butz family. His wife of 25 years is a Certified Public Accountant and Business Manager at Navy Hale Keiki School and treasurer for the Radford PTSA.

Butz is a self-professed military brat,  who  was born in England, but also lived in Texas, California, Montana, and South Dakota.

“I finished my last two years of high school in Peru, Indiana. When my dad retired from the Air Force, my parents moved back to Sioux Falls, SD,” he said. “I have two older sisters that live there too, and my little brother lives just a few hours away in Wisconsin.”

Before his first teaching job, he spent 21 years in the Air Force as an aircraft maintenance officer.

“I’ve always had a passion for airplanes. My dream as a kid was to become a pilot, but I’m color blind so the  Air Force wouldn’t let me fly,” he said. “In my Air Force career, I had assignments in New Mexico, Ohio, Illinois, South Carolina, Saudi Arabia, Hawaii, and Texas. I’ve traveled to 15 different countries.”

His first teaching job was as a long term substitute for the second semester of the 2nd grade at St. Michael’s Catholic School in Waialua.  He stayed at St. Michael’s the following year teaching math and science to 6th, 7th, and 8th graders. Then, he took a position at a financial planning company.

“I worked as a financial advisor but I really didn’t enjoy it, and I missed being in the classroom,” Butz said. “I heard the DOE was in desperate need of science teachers, so I decided to apply, and here I am.”

Butz currently teaches Conceptual Physics and STEM Robotics. He said teaching is rewarding because he witnesses those “aha moments that students have when I have finally found the right words to explain a difficult concept and learning happens.  I also really enjoy being around young people because they are so full of life and energy.”

He admits that “this is the toughest job I’ve ever had. I still have a lot to learn as I strive to become a highly effective teacher, but having the opportunity to make a positive impact on even one student’s life is a huge intangible reward. I have much respect for all teachers everywhere.”

In his free time, he enjoys watching football and playing fantasy football. He also loves spending time with his friends and family, running, traveling, and hanging out at the beach. 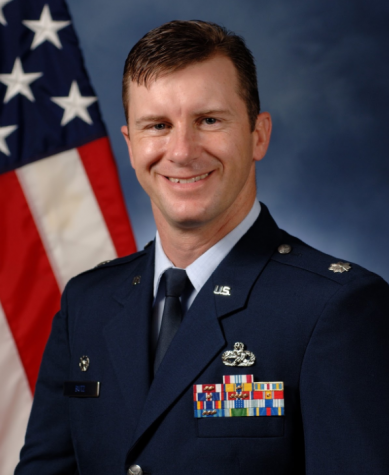