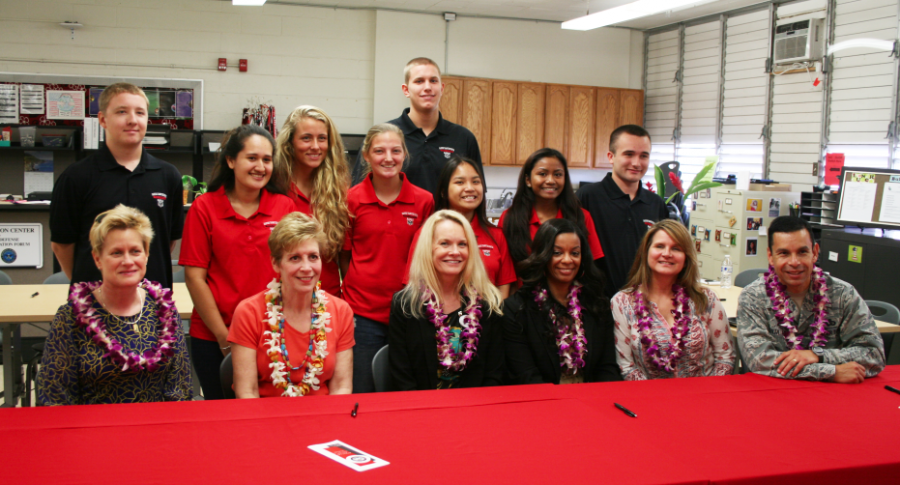 The door to Room 112  bears a wooden plaque engraved with the Hawaiian words “Malama I Na Haumana” which means “Caring for the students.” It is home to the school’s Transition Center which attracts dozens of visitors each year. On Feb. 9, a group of military guests paid a special visit to the center.

Dunford is the wife of General Joseph F. Dunford Jr., who is the Chairman of the Joint Chiefs of Staff. Gen. Dunford is the nation’s highest ranking military officer and principal military advisor to the President, Secretary of Defense, and National Security Council.

Student facilitators were on hand and presented about the program and their experiences in the Transition Center.

Radford’s Transition Center is designed to prepare and support transitioning students in order to promote academic achievement and a successful adjustment to the school’s community.

Due to its transient student body, the school enrolls students from all over the world, almost on a weekly basis. During the third quarter alone, the school received 48 new students.

“The count of new students serviced through the TC to date this year is 259,” Transition Center Part-Time Teacher Janice Cortez said.

Student facilitator Jake Tufts (11) said that Radford is a “small school in Hawaii [that] can go out to the world. Through our actions, we can show students Radford’s principles.”

New students participate in a two-week class which involves looking at the school, adapting to change and coping with stress, learning about Hawaii’s uniqueness, and charting educational goals and plan.

Student facilitators present about lessons offered to new students when they go through the Transition Center’s orientation program. New students participate in a two-week class which includes four units on looking at the school, adapting to change and coping with stress, understanding the uniqueness of Hawaii, and charting a student’s course and academic passport.