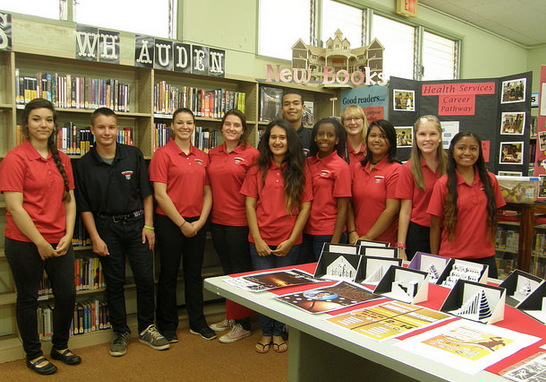 Fourteen student facilitators volunteer their time to assist new students as they work to ensure the integration of transfers to the school and community. In order to become a Transition Center facilitator, the student submits an application, passes an interview, and undergoes training.

Room 112 is home to the school’s Transition Center. Its door bears a wooden plaque that reads, “Malama I Na Haumana,” which means caring for students. Since the center’s inception, those involved in the Transition Center have managed to do just that.

A festive atmosphere marked the event, with visitors and Military Youth Advisory Council members donning lei, while gathered around the center’s entrance. Those in attendance maintained a respectful silence during the ribbon-cutting ceremony, but broke into smiles when the school’s drumline treated them to an energized performance at the end of the ceremony.

Roughly 60 percent of the Radford High School student body is made up of military dependents from all over the world. Some come as far as Italy, Australia, Ukraine, and South Korea, while others transfer from as near as Aiea and Moanalua.

During the first semester alone, more than 185 new students enrolled.

Charlene Agoot (12) is one of 14 student facilitators who spend time during recess, TASK, and lunch to assist new students. Facilitators teach four units which includes looking at the school, adapting to change and coping with stress, charting one’s course and academic passport, and getting to know Hawaii and the community.

“As a local student and someone who loves Radford, I wanted to make sure these students felt welcomed and feel this family atmosphere Radford has,” Agoot said.

“I was just blown away,” Deputy Superintendent Ronn Nozoe said. “Talking to the [student facilitators] was just a remarkable experience.”

In the second half of the celebration, guests were invited to the library to hear the history behind the center. Principal James Sunday shared how the Transition Center was the “brainchild of [former principal Robert] Stevens.”

A long time Ram of 40-plus years, Robert Stevens was a fixture at the school in varying capacities as an athletic coach, teacher, and counselor before his 14-year tenure as principal.

With the constant flux of students arriving at the school, both Ikeda and Stevens saw an opportunity to create a place to address students’ needs.

Ikeda said, “[We recognized] that we needed to pay attention to our students coming in and [provide them] a safe place.” After 40 years of service in the Department of Education, Ikeda recently retired at the end of December.

Class of 2013 alumnus and valedictorian Chandler Carlson said, “The Transition Center was phenomenal in getting me plugged in… and helping me blossom.”

He said that the Transition Center helped make his move to Radford easier than previous moves to other schools. Today, Carlson is a sophomore at University of Denver.

“As parents trying to figure out where to put our kids, the facilitators were phenomenal,” Assistant Superintendent of Schools of Facilities and Support Services, and Radford parent Dann Carlson said. “We have never seen a program like this… We were blown away…I couldn’t be more proud of them.”

New students who transition into Radford are not the only ones who benefited from the Transition Center. In his speech, the elder Carlson said that the Transition Center also impacted his two younger children. When the family moved to Washington, DC, his children shared the center’s concept, which eventually led to a similar program at their new school.

“You guys are making an impact on the U.S,” he said.

While the Transition Center aims to assist new students to the school, it also impacts the lives of current student facilitators.

“After being in the program, I noticed the difference we make in the students,” Agoot said. “Seeing the students smile and laugh [gives] me confidence.”