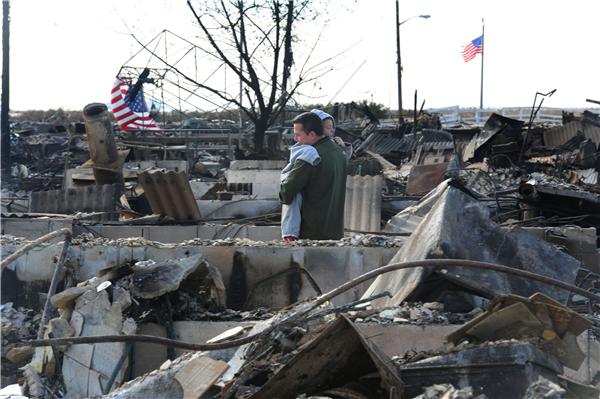 New York has started to ration its gas in the post-Sandy conditions. The police came to monitor the situation as people arrived before dawn to receive their rations.

Juan Rodriguez said, “I can’t get through Friday with this amount of gas.  I’m really stuck. I don’t know what I’m going to do.” He told this to CBS New York Station WCBS-TV as strict days were distributed.

Soon after the superstorm hit, the east coast got slammed with yet another storm. In snow form. This new development hampered any and all efforts of the people to repair their homes, courtesy of Hurricane Sandy. If offered heavy rain, snow, and winds, once again hindering the normal day to day lives of those in the densely populated east coast.

New Jersey is trying to create more protective dunes for the smaller scale storm as Sandy had destroyed its others. Without those dunes, a weaker storm can become very dangerous as well.

Those in the New York-New Jersey region had lost power twice, with Hurricane Sandy and then with the smaller storm. Over 600 flights were cancelled all over the east coast ramping up to the insane number of 1,600 on Wednesday. New Jersey saw up to 12 inches of snow overnight, while Connecticut and Rhode Island saw up to 6 inches.

In the storm ravaged east coast, still the major challenge is finding housing for the tens of thousands of people who are homeless. Some may even need it long term.

Superstorm Sandy left thousands without homes and those with are without power.  Associations are doing their best to aid the coast back to health. “Everyday its the same now: turn on the gas burner for heat. Instant coffee. Use the iPad to find out what’s going on in the rest of the world,” said John Monticello, a resident of New Jersey.