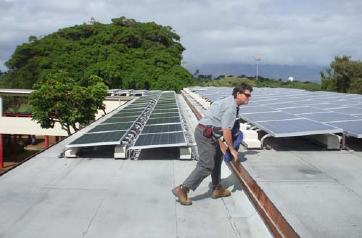 In an effort to be energy efficient, the Hawaii Department of Education (DOE) selected Radford High School among several Oahu schools for rooftop photovoltaic (PV) installations.

PV systems are made up of solar panels that convert sunlight into electricity.

“It is basically a way to lower electrical cost to the school and has the ability to produce electricity for the school to use,” Dr. Elias Ali, principal, said.

“Each school depending on size and consumption of electricity will vary,” Bloom said.  “Radford High School, being a large campus with high electricity demand and usage with current HECO rates can average $60,000 per month.”

“PV Systems vary widely in cost but generally, depending on the size of the system and the components they can be approximately $4.00 per watt,” Bloom said. “This would be the cost of the design, installation and system commissioning and operation. Since Radford has 259,200 watts the cost times $4.00 is $1,036,800.00.”

Under the Power Purchase Agreement (PPA), the PV installations at the schools will be completed at no cost to the state. Since the energy the school produces through the contractor’s PV system is sold back to the DOE at a lower per kilowatt rate, the DOE benefits with a lower energy bill, said Bloom.

“Our energy is sourced through sun production so the additional benefits include not burning fossil fuels and helping to clean up the environment. Win – Win,” said Bloom.

PV systems have been set up on the rooftops of buildings B and M and the gymnasium. Consequently, the rooftop activities have created incessant noise during instruction.

According to Bloom, a PV system should perform and last for over 25 years. He further shared that there are PV panels on some of the early satellites put into space that are still operating 40 years later.

The school has a monitoring system (called DECK ) set-up in the library. Viewers may see production information in real time using the dashboard display that is set-up for public viewing.

Check out how much the school is generating on its own. Radford Deck Monitoring 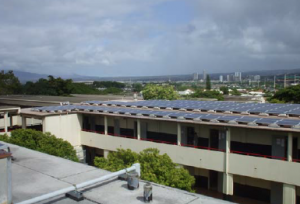 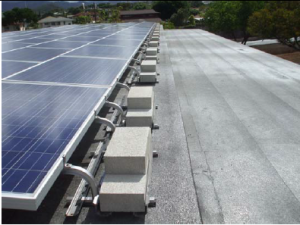