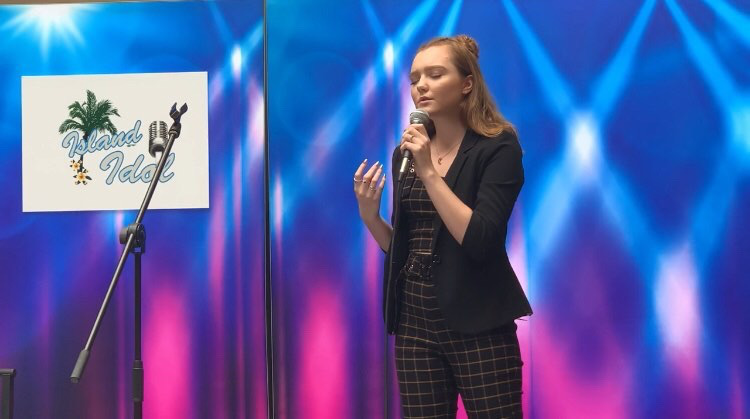 Mackenzie Long (11) participated in her second year of Island Idol, both times leading her one step closer to American Idol. “American Idol is a tough competition with a lot of unique voices so I think if I was given the privilege to go I would want to pick a song that not only shows who I am and what my style is but also pick a song that makes my voice stand out!” Long said.

For the second year in a row, Mackenzie Long (11) auditioned for Island Idol in hopes of becoming a finalist and winning the Silver Ticket with the chance of auditioning for American Idol. Running against 53 other contestants and still landing Top 8, Long said she felt “really surprised. I watched every audition, I kept on looking and looking. I was really surprised when I found out, because there was a lot of people.”

As a finalist last year, Long took her experience and applied it to her second year as a contestant.

But it wasn’t just her experience from last year that helped make her Top 8. “I have been singing since I could talk.” Long said. “I always loved to sing to Disney movies when I was a toddler! I started to actually spend more time on it when I began moving, because like a lot of kids at Radford I am part of a military family.”

Long quickly realized how hard it is to have to walk away from the people you have learned to love.

“Though no matter where I went, even though I was in a completely new surrounding, my way of coping with it was to run to music. I know that no matter where I go music will be right by my side. music is the one thing in my life that I can always count on to be there.”

Unfortunately, Long did not win the Silver Ticket this year. Despite this, Long has seen improvement along her singing  journey. “It’s crazy how much my voice has changed in a year, I have definitely learned so much from last year.”

Hopefully, her journey inspires some of the  students at Radford to find their own voice.