Paul Cavallaro recently retired from the US Navy, after 24 and a half years as a nuclear trained  supervisor and mechanical operator, and joins the school’s Navy JROTC program.

Cavallaro has a son who graduated from Radford in 2012 and a daughter who is a senior this year. As a parent in the school community, he said, “I have always enjoyed being around the students and faculty at Radford, whether it be as a volunteer, parent or sports fan.”

“Now, as a teacher, I have been further impressed by the dedication, spirit and commitment of the entire Radford family, students, parents and faculty alike,” Cavallaro said. “In my short time on campus, I’ve been made to feel right at home by all of my fellow teachers and administrators, and I am working hard to forge a strong connection with my students in the Navy Junior ROTC.”

He said that his family is heavily involved in a number of outdoor activities.

When he is not running, he said that he enjoys stand-up paddleboarding, snorkeling, golfing and hiking with his family.

He also said that he enjoys volunteering in the community.

“For the last 2 years I have volunteered with Malama na Honu on Laniakea Beach, as part of the Hawaiian Green Sea Turtle conservation efforts.  I’ve also been an active volunteer with the Radford Red Brigade Marching Band since 2011.” 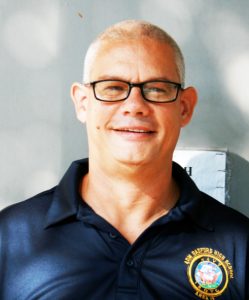